Walks With A View … Or Two 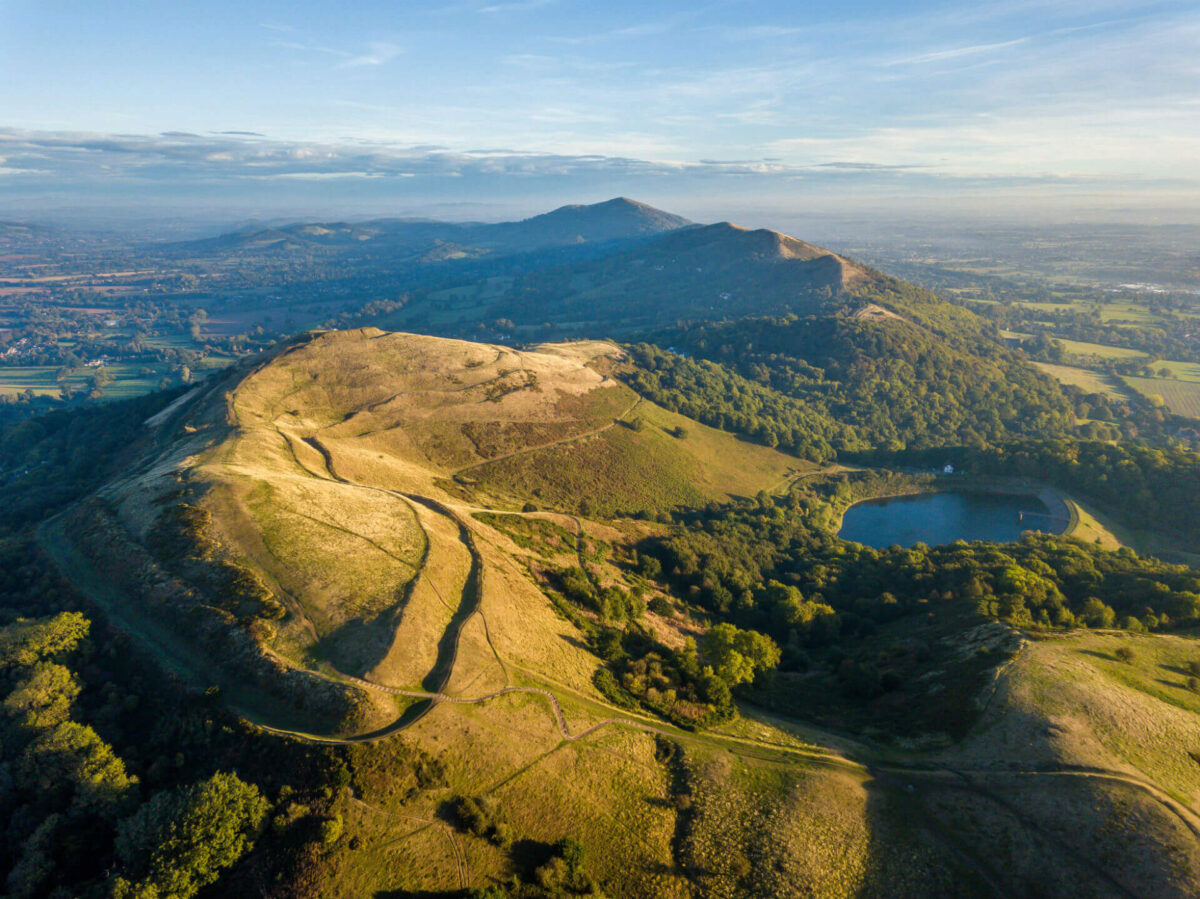 You can’t beat a natural panorama to revive body and soul, and The Malverns are blessed with a plethora of richly diverse, far-reaching ‘take your breath away’ views. Of course, In a county famous for its iconic hills range, the mind naturally gravitates to ‘views from the top’, and they certainly don’t disappoint. It’s the stuff of poetry (literally for William Langland and John Drinkwater) but for those unable to scale the area’s highest peaks, there are plenty of framed vistas to be enjoyed from its river banks and gentler foothills.

The British Camp – ‘One of England’s Goodliest Views’ (3.5 miles)
Unlike its rather more majestic neighbour, the Worcestershire Beacon, whose parent peak, Hergest Ridge, scales 425m, The British Camp (Herefordshire Beacon) is barely a mountain in real terms, standing at just a little over the traditional height qualification. Yet the views from this famously fortified Precambrian hill are no less spectacular and on a good day, you’ll see thirteen counties, the Black Mountains, and a snapshot of England’s green and pleasant land. Start out from the car park at British Camp and head immediately uphill through the trees southwards along the ridge where helpful indicator stones entice you to carve out a charming and picturesque trail to Shady Bank Common and Shire Ditch until you come across a 5-way meeting of grassy paths in a gap called the Silurian Pass. This walk, once dubbed ‘British Best View no 4’ by The Guardian, takes in views of the bracken-covered slopes of Swinyard Hill, common-land at Castlemorton, sheep pastures, orchards, a quarry and a reservoir. Don’t miss the Giant’s Cave! For more information, please click here.

View from the River Bank – Stanford Bridge to Tenbury Wells (Temeside) (9.5 miles)
Rising out of the Kerry Hills in Mid-Wales, the beautiful River Teme flows down through Knighton and into the market town of Tenbury Wells before it eventually joins the Severn in Worcester. It’s a shallow, tranquil waterway with low levels of salmon, an increasing otter community and a notable population  of barbels. The route meanders through peaceful valleys and rolling countryside offering long-distance picture-perfect views from the river’s edge, not to mention the chance to spot everything from buzzards, badgers and toads along the way.  Access to the riverbank is limited but this route takes you close to its path through a landscape once famous for its hops, which are remembered each year courtesy of the annual Beer and Hop Festival at Eardiston. The walk from Stanford to Tenbury follows the rim of the Teme Valley, so expect magnificent views especially as you come down into the town. There’s so much to see on the way including Eastham (best viewed from the redbrick bridge), Rochford and Knighton on Teme churches – some of the earliest Norman examples in the district, and a section of the Leominster Canal, which, if you didn’t know, was never completed. There are some lovely river meadows at Stanford Bridge and a nature reserve at Hanley Dingle. For more information, please click here.

Spectacular Suckley – A Prehistoric View
With its eastern side firmly established in the Malvern Hills Area of Outstanding Natural Beauty, the parish of Suckley, covering 4 square miles, is close to the border with Herefordshire and is an area resplendent in apples, beef, cereals, hops, milk, oil seed rape, pears and potatoes. The Silurian aged rocks of the Suckley Hills offer wonderful walks with impressive panoramic views of rural Worcestershire and pollution-free air, perfect for lifting the spirits and recharging the batteries. This walking trail is part of the Geoparkway Circular Trail, beginning at St.Magdalene Church, Alfrick before ascending up Crews Hill.  At the top, look north-east to the Clent Hills and the Lickey Hills, composed of rocks approximately 299 and 488 million years old respectively, and due east for spectacular views of the Worcester Basin. The Malvern Hills, Bredon Hill and the Cotswolds, and the Abberley Hills ridge complete this superb panorama. The walk takes in the Knapp and Paper Mill Nature Reserve and Leigh Brook, and the patchwork of woodlands, orchards, pasture and farmland is dotted with native hedgerows, oak trees and stiles. For more information, please click here.

Chasing a View – Hollybush to Raggedstone Hill (2 miles)
Views from the most southerly end of Malvern’s magnificent hill range are not be under-estimated. What Chase End Hill and Raggedstone Hill lack in height compared to the giant Worcestershire Beacon, is easily made up for in beautiful panoramas of the surrounding countryside. Start out from the Hollybush car park on the Herefordshire and Worcestershire border and head down the Herefordshire side of the hill, through a kissing gate marked ‘Eastnor Castle Estate’ and through the woods to the infamous White Leafed Oak Tree. This rather sinister-looking, mystical tree is adorned with Tibetan prayer flags, beads and jewellery on account of its legendary nod to Druid symbolism and connections to Stonehenge. The site offers wonderful views to Chase End Hill, the smallest hill in the range, with its white stone trig point. The route drops down into the charming little hamlet of White Oak Leaf, depicted as ‘Cross Oke’ in the oldest surviving map of Malvern from 1628. From here you’ll follow a steep path along the ancient boundary of Red Earl’s Dyke up to Raggedstone Hill, whose shadow, according to legend, casts misfortune upon whoever it falls, and where you’ll be able to see the Obelisk at Eastnor and May Hill in Gloucestershire.  If you didn’t already know – ‘Raggedstone Hill’ was also a song by Dodgy, written and recorded in Malvern in 2011! For more information, please click here.

For more information about walking around The Malverns, please click here.

On The Scent of A Good Dog Walk

Walks…. With A Pit Stop

Stay Atop The Malvern Hills at Ridgeway Cottage

Ridgeway is a cosy and comfortable holiday cottage, nestled in...
Family Fun | Festival | Walking | What's On

Malvern Walking Festival – over 90% sold out

All the walks take place in and around the Malvern...
Family Fun | Walking | What's On

Take on this 11 mile challenge for WellChild, the national...
Home Blog Walks With A View … Or Two