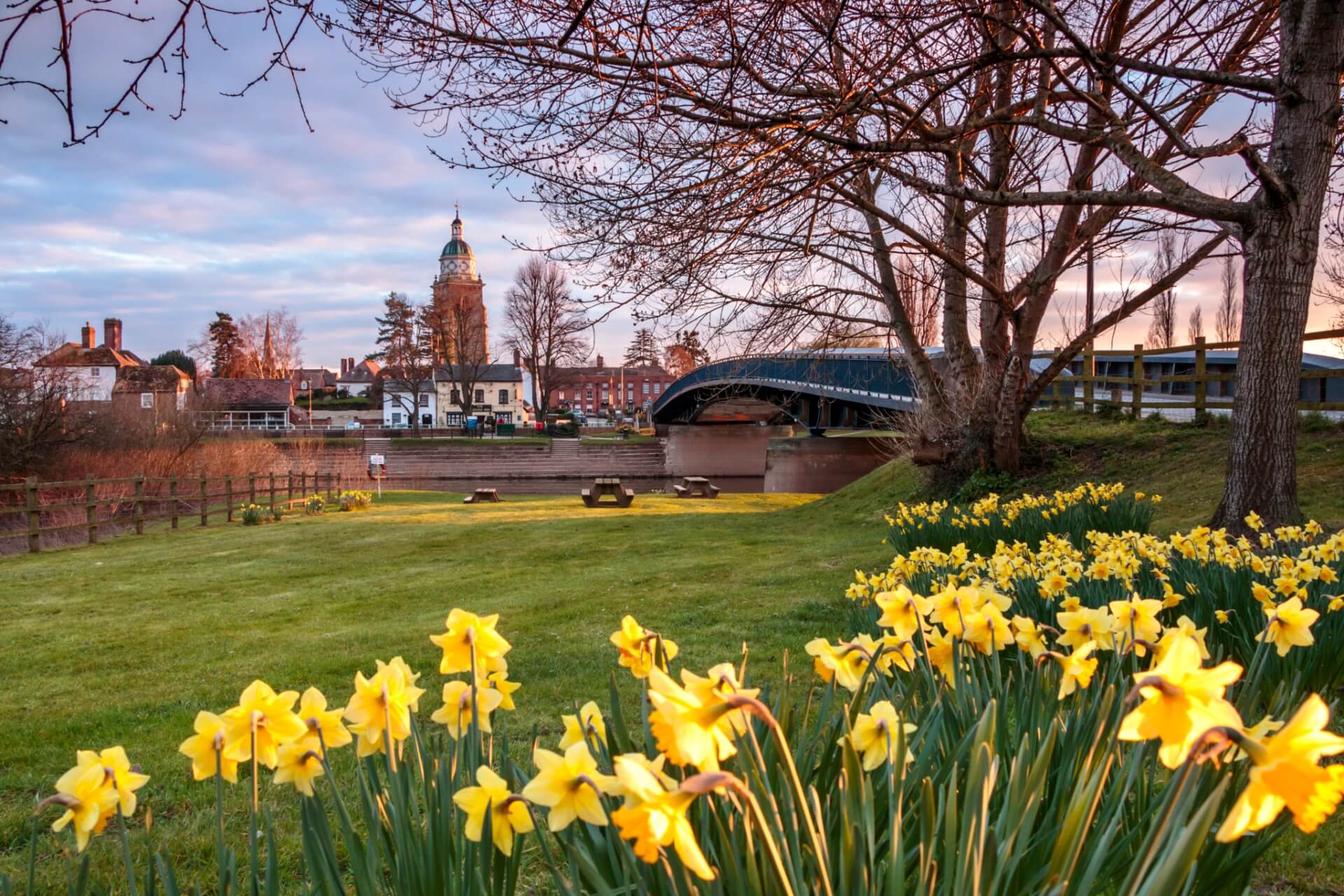 The town of Upton upon Severn, at first glance, is collection of pretty black and white buildings lining the banks of one of the UK’s most important rivers. However, behind this bucolic scene, there is a secret past as well a thriving modern town.

Upton upon Severn used to be an important port, as well as being the only river crossing for many miles. For centuries before modern transport, it was alive with river craft carrying goods to and from the rich agricultural areas around it. Today, pleasure craft have taken over. There is a flourishing marina on the east bank, and Upton’s historic prosperity can be seen in its variety of delightful old buildings, including pleasant places to eat and drink and many independent shops to browse for a perfect gift or souvenir.

Upton is a town with a liveliness out of all proportion to its size. Its attractive shops, delightful inns and a variety of events each year, such as the Jazz, Folk, Blues and Sunshine Festivals draw crowds in their thousands. It’s a place that has much to reveal.

The Floating Home at Upton

The Floating Home at Upton will be launched and ready...
Accommodation

Hill House at The Eades

Exclusively yours, Hill House at The Eades is a large...
Shop

A walk around our historic and attractive riverside town. This...
Attraction

Museum of Upton's Past and Present with an award winning...

Look out for the “Pepperpot”, a most distinctive medieval church tower topped by an 18th Century cupola in place of a spire. Inside (it’s now the Tourist Information and Heritage Centre) you can find out what happened to the church and also discover its part in one of the most dramatic episodes of the Civil War and the great plague.

Upton upon Severn has entered the annual RHS Heart of England in Bloom campaign since 2003 and has gained a Gold award every year, and won its category. It has been nominated for the RHS Britain in Bloom national campaign five times, gaining a Silver, two Silver Gilts and, in 2018, a Gold award. Volunteers run every aspect of the stunning floral displays and also maintain permanent flower beds.

Today’s Upton Bridge is still the only Severn crossing for quite a long section of the river. As you look at its modern structure, try to imagine the bridge which Cromwell’s men managed to cross, in a famous skirmish not long before the Battle of Worcester. Then ask yourself where the old bridge stood – it was not on the site of the present one!

Henry Fielding the famous dramatist, journalist and author, who based his books on friends and colleagues, stayed at The White Lion in Upton upon Severn and in 1749 wrote of The White Lion in the History of Tom Jones, ‘Tom took … his redeemed lady … to that Inn, which in their eyes presented the fairest appearance in the street’ and he called the hotel ‘a house of exceedingly good repute’. He also mentions The Rose Room and The Wild Goose Room, both of which remain in use today.

It was recorded in 1822 that there were 17 Taverns and Coaching Inns in Upton for a population at the time of 2,319 – there are now 8 of the original drinking establishments but the population hasn’t changed that much, now approximately 2,600.

When you look at the buildings in Upton, remember to raise your eyes above the shop fronts as many of these buildings are older than they look and it’s by looking up that you see the clues to their age.

Head to the picturesque riverside town of Upton upon Severn to browse around the independent shops to purchase a selection of fine goods, from vintage furniture and homewares to traditional toys, railway models, and everything in between.  You’ll love the range of unique shops on offer, the historic architecture across the town, and the lovely settings available to stop for a bite to eat or refreshment along the riverside.

Nestled on the banks of the River Severn in Worcestershire,...
Festival | The Arts | What's On

The Jazz Festival is back and better than ever. A...
Activities | Christmas | Family Fun

Youngsters will be able to be certified as honorary elves...
More Posts

Plan Your Visit to Upton

Find out about how to get here, car parking, our Tourist Information Centres, and much more in our Plan Your Visit section.

We look forward to seeing you in this beautiful part of Worcestershire soon.

Home Things To Do Towns Upton upon Severn