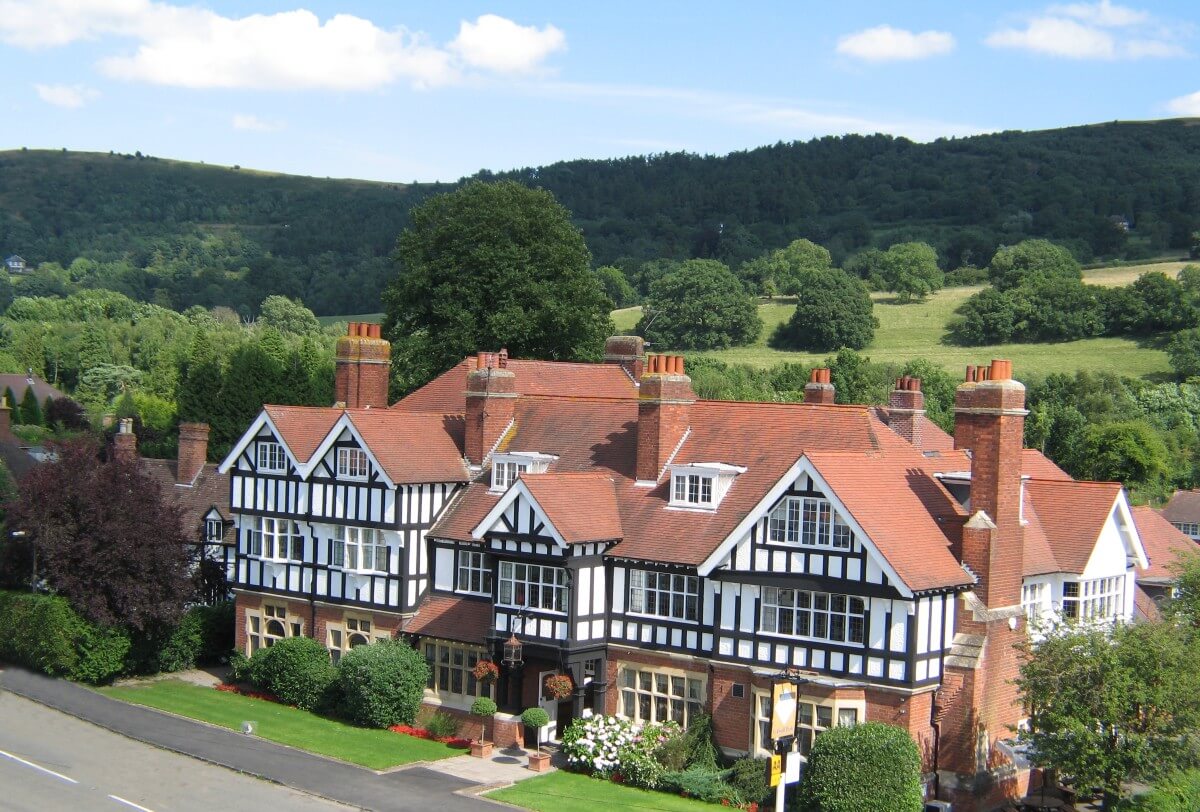 In a time where the world was dominated by the Second World War, in the year 1945, Anne Dunn, who was just six years old at the time, embarked on her first family holiday to Colwall Park, a country hotel located in Malvern and has enjoyed it so much she has continued to visit for almost 80 years.

With an abundance of fond memories, Anne recalls magical Christmases spent with family and friends in the Edwardian ballroom, horse riding and walks along the beautiful Malvern Hills and even meetings with a world-renowned artist.

As a small child, Anne would visit the hotel with her parents and sibling but later on in life, she visited with her husband and introduced him to her ‘home away from home’. After her husband sadly passed away, Anne welcomed her daughter and a new puppy to share her most recent visit to her favourite hotel.

After first visiting Colwall Park almost eight decades ago, Anne has plentiful of memories to reminisce over, with her most recent visit with her daughter and puppy, Bronte, going so well, Anne sat down and shared some of her most favourite memories made at Colwall Park and tells us what keeps her returning all these years later.

Why did you start visiting Colwall Park?

“I had a lot of association through my father. When we started visiting the hotel in the mid-1940s my father was the hotel’s accountant. We used to go for every holiday, from Christmas to Easter and even the summer holidays.

The family who ran Colwall Park when I first visited had a son who was the same age as me, so I always had a friend to play with when I stayed at the hotel. I was too young to fully realise the impact of the war but what I can remember is that the family was always so welcoming and made every visit very special for our family.

I remember there was a bookkeeper there called Miss Mack who my father worked closely with. Did you know that the old ledgers are still kept in the hotel? I had a look the last time I visited, and they have them on display. It was a wonderful trip down memory lane.”

What is your best memory of spending time at Colwall Park over the years?

“I have very happy memories from all of the visits to the hotel. From my childhood, it is probably Christmas. Christmas in the hotel was always so special. They made the whole hotel beautiful with festive decorations, and in particular, the old ballroom was magical to look at. The team used to arrange a Christmas party for the children, where local children and visiting children were all invited. One year, for New Year’s Eve, it was my job to look after my little sister, she’s seven years younger than I am. My parents had dressed her up as a little fairy and I had to pull her around on a sledge.”

Did you ever meet anyone particularly special whilst staying at the hotel?

“Yes, I did. When I was staying there when I was eight years old, the artist Dame Laura Knight – who has a plaque to honour her at the hotel – moved into the hotel following the death of her husband. It was Christmas time, and my parents had given me an autograph book, so when I saw Dame Laura, I asked her to sign the book for me. She took my autograph book and sat down at the desk in the room and sketched me a picture of a clown with the dipping pen that was on the desk. I stood by her and watched her do it, it was wonderful, and I still have the picture framed in my living room today.”

Were you in contact with Dame Laura again after you first met her?

“Well, I was reading about her many, many years later, and it prompted me to write to her. She was in her very old age then, and I just wanted to remind her how pleased I was with the picture that she drew for me, and that I still had it all those years later. She wrote back to me saying that she did remember this little girl standing by watching her draw, so that is a very happy memory I hold dear from my time at Colwall Park.”

Do you enjoy walks up and along the Malvern Hills?

“Of course. It is so beautiful up in the hills, and the best part is there are paths that access the hills directly from the hotel’s gardens. My daughter, the puppy and I had two stunning walks up the hills the last time we were at the hotel.

I think it is wonderful that country hotels like Colwall Park allow guests or visitors to bring their dogs along with them. That’s exactly what people want nowadays. To be able to walk their dogs, be accommodated in their rooms with them, and even let them into the bars. It was great for us; we couldn’t have been more pleased.”

What is your favourite thing about the hotel?

“There is such a lot to choose from! I think that it has such a lovely, warm, welcoming feeling. I think I associate it with when I was little which brings back so many nice memories. The staff are amazing and always so helpful too.”

What do you think is the one thing that guests should do whilst staying at Colwall Park?

“Make sure you go for lots of walks. The walks are the greatest thing. The Malvern Hills are very special, but there are lots of other places of interest in the local area too – like Eastnor Castle, Ledbury or even Malvern itself.”

Anne has enjoyed every trip she has had to Colwall Park and doesn’t plan on stopping her visits any time soon. As the hotel’s longest returning guest, Colwall Park has been an integral part of her life that she has shared with friends and family over so many years. Through sharing her trips with her children in her later years, she continues to spread the warmth she feels when visiting Colwall Park with her loved ones, and now with her new puppy too.

To find out more about the hotel, or to inquire about a reservation, you can find Colwall Park online at www.colwall.co.uk or call the helpful team on 01684 540 000.

The 10 Steps To Our Perfect Romantic Getaway

Looking for some outdoor adventure during the school holidays? Summer...
Heritage | What's On

This one-day outdoor event, which has taken place nearly every...
Heritage | What's On