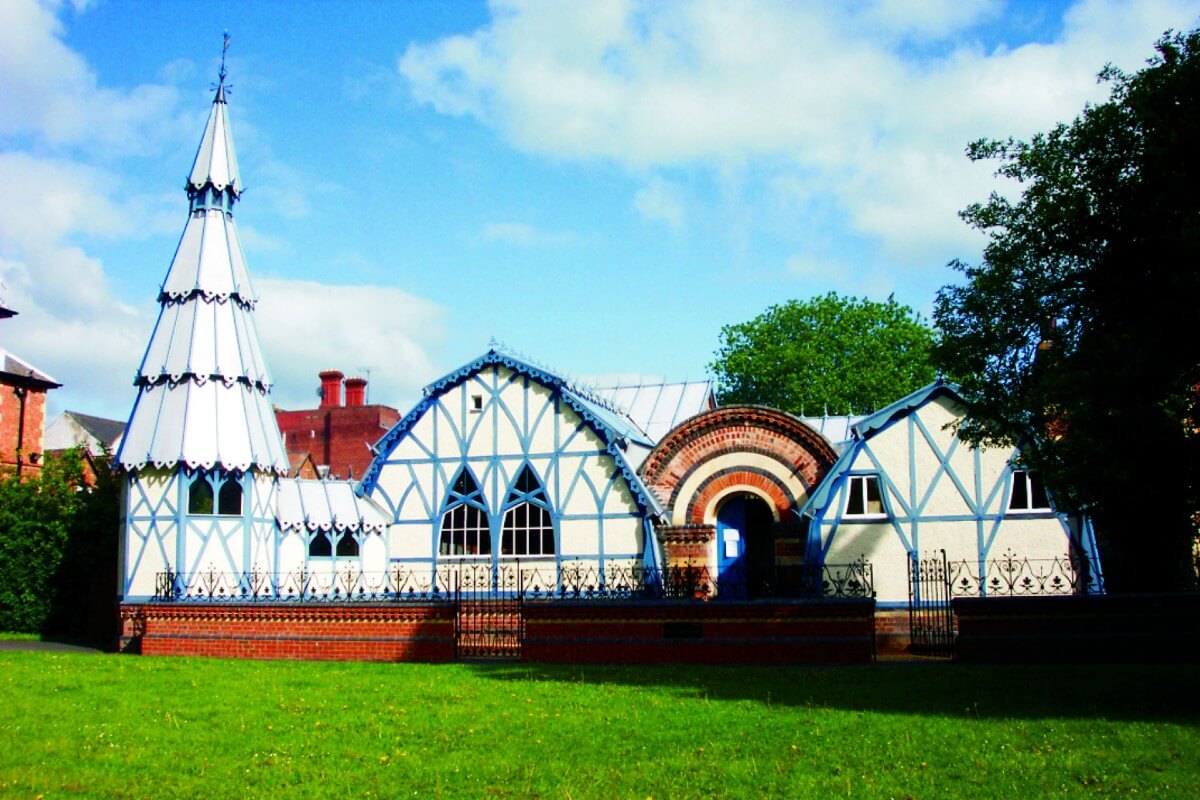 Named ‘My Little Town in the Orchard’ by Queen Victoria, Tenbury Wells is steeped in agricultural culture and heritage and is worth the meandering drive through fields of hops and fruit trees to reach the rural town in the Worcestershire Teme Valley with lots of things to see and do. Stay longer at one of the many caravan or holiday parks, self-catering properties or at a choice of hotels and B&Bs.

The Regal Theatre/Cinema may look like a stunning art deco building from the outside, but never judge a book by its cover. Fitted with all the very latest digital projection equipment, this cinema is anything but outdated. Officially opening its doors in 1937 and still showing films and live performances today, you won’t want to miss the gorgeous architecture, the stunning murals on the walls and the celebration of the arts.

Tenbury Wells sports an incredible selection of independent shops and retailers with anything you could dream of; gifts, chocolates, fine clothes, a fishmonger and so many more. Wandering through the streets make sure to take in the beautiful timber-beamed buildings in and amongst the shopping streets and markets.

A special mention goes out to Tenbury Well’s own ‘Willy Wonka’. Mr Thoms is a shop serving handmade sweets, chocolates and bakery items all made onsite. He even has his own chocolate factory! Everything from doughnuts to truffles to hot chocolate bombs, the delicious goodies up for grabs are second to none.

In the centre of town is an unusually round structure. This is the Round Market, originally the Butter Market when it opened for business in 1858. Intended to be used by farmers’ wives to sell their produce away from inclement weather, you will still find excellent bargains and local gems on Tuesdays, Fridays and Saturdays.

The museum boasts an impressive collection of artefacts in each room, coming together for an extensive retelling of Tenbury Well’s history. Since the Iron Age, from its origins as the only river crossings for many miles, to becoming a spa town in the 19th century. Run by volunteers. Please check opening times before visiting.

Along the Teme Valley beautiful green spaces follow the snake of the river through the area.

The Burgage is a beautiful recreation area with fields, children’s play area, tennis courts, bowling green and memorial garden. The word ‘burgage’ is derived from the medieval term for enclosed fields outside of a town. Today, the views of the river and flora and fauna of the area are second to none.

As part of the celebrations for the millennium, the Tenbury Millennium Orchard contains 44 different varieties of apple tree. This is a beautiful collection of nature’s finest produce from an area of the country famed for its apples. The orchard is maintained by a committee of volunteers.

The Pump Rooms is Tenbury’s most eccentric looking building. Constructed in 1862 in an effort to solidify Tenbury as one of the great spa towns cropping up at this time. This unfortunately was not the case and the building eventually fell into disrepair until restored to its former glory in recent years. There is not all-year-round access to inside the building, but come and take a ‘selfie’ with its unusual architecture!

At the end of Teme Street, you will find the historic Tenbury Wells bridge which provides views up the river as you walk into Shropshire – the border is on the bridge.

Across the bridge, you can access the Tenbury Wells beach, which a strip of beach besides the River Teme.

A Short Distance Away

A wonderful hidden gem in the Teme Valley. Pensons is an Michelin Star ingredient-led restaurant located on the Herefordshire-Worcestershire border on the beautiful Netherwood Estate.

First opened in 1905, Shelsley Walsh is the oldest operational motorsport venue in the world. A celebration of engineering, automobile excellence and human prowess, not only the hill climb but classic car tours, car club events and many more. An 1000 metre track and 100 metres tall, the record for fastest ascent belongs to Martin Groves who only took 22.58 seconds!

Kyre Park Gardens is a former deer park of medieval origin, licensed in 1275. The main house can be dated back to the medieval era, with later Elizabethan, Jacobean and Georgian additions. The landscape gardens and pleasure grounds were laid out in 1754 by Capability Brown. A family seat, a WWII military convalescent, a sanatorium and nursing home for children, a care home and a family home. Kyre Park has a rich and vibrant history, with strong social and political ties. You can tour the gardens whilst visiting the new Kyre Park Antiques Barn and Bistro.

Witley Court was first built in the 1700’s and then continually extended well into the 19th and 20th centuries to create one of the most spectacular Victorian and Edwardian mansions in Britain. Due to a fire, only a gilded skeleton remains but the effect is somehow even more breath-taking; its former glory still unmistakable. The attached grounds, dotted with stunning fountains and temples and the ghost of an orangery, are beautiful rolling meadows for the whole family to enjoy. In recent years there’s even a child’s play area built into the woodland.

Brockhampton Manor House is a 14th century timber-framed house complete with moat and gatehouse. The attached grounds feature extensive orchards, park and woodlands. You’ll find adorable breeds of cattle and sheep that have grazed on this land for centuries amongst a wide variety of wildlife.

Berrington Hall is a gorgeous Georgian manor surrounded by beautiful landscapes. The rooms tell the story of the families that have lived here before. Gilded ceilings, tapestries, period furniture, secret servant passages, this stately home is an excellent day out with plenty to explore.

Staying longer, then only a short distance away by car (30 minutes to Kidderminster) but well-worth the trip, you can be taken back in time to a bygone era. Frozen in time, the Severn Valley Railway still operates full size steam locomotives. A beautiful and whimsical station unaffected by the fast-paced modern world, take in the 18th century architecture and plumes of steam as trains pull in and out of the station. You will also find The Engine House, an interactive museum retelling the history and rail in the area as well as home to several locomotives.

Find Out More About Tenbury Wells

Visit One of our National Trust Places for FREE this Autumn

This Autumn until (November 30) the National Trust are offering...
Activities | Christmas | Family Fun | What's On

The great trees lining the thoroughfares turn a kaleidoscope of...
Home Blog Top 10 Things To See And Do In And Around Tenbury Wells!