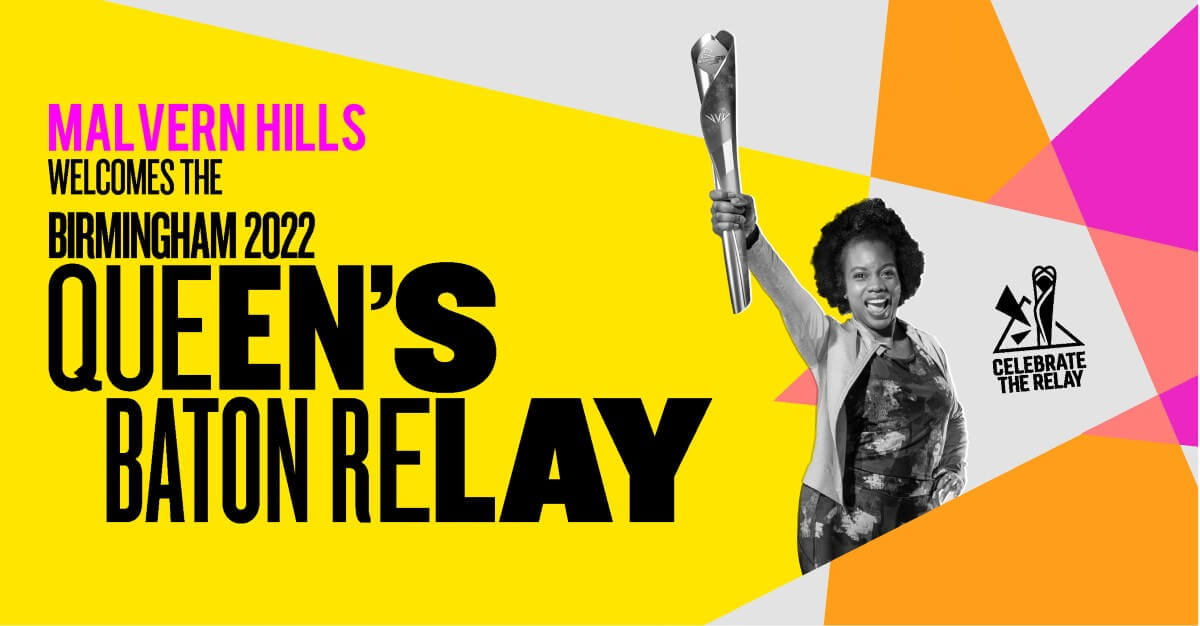 In England, the Queen’s Baton Relay will provide the opportunity for communities to experience the excitement for Birmingham 2022, as the 11 days of show stopping sport near ever closer. Kicking off on Thursday 2 June, The Queen’s Baton Relay is set to travel the length and breadth of England for a total of 29 days, before culminating at the Opening Ceremony for Birmingham 2022 on 28 July 2022.

There will be plenty of opportunities to see the Baton as it goes through the Malvern Hills District on the afternoon of 22 July 2022.
Starting at Upton Marina the Baton will relay through Upton town centre. Next stop, the Baton will be travelling up to Worcestershire Beacon and then down to Malvern Town Football Club. Lastly, the Baton will be relaying through Priory Park, up Church Street and finishing on Belle Vue Island before departing the district. A full schedule will be announced closer to the date. There will also be activities and celebrations going on throughout the afternoon which will be announced nearer to the time.

Thousands of Batonbearers, each with inspiring backgrounds and stories, will have the honour of carrying the Baton during the journey through England, including those nominated in recognition of their contributions to their local community, whether that be in sport, education, the arts, culture or charity. Between 40 and 130 Batonbearers will carry the Baton each day, and the Relay will reach hundreds of villages, towns and cities during its tour of the country.

One of the confirmed Community Batonbearers for the Malvern Hills District will be John Clark, from Rushwick, a gym owner, mentor and coach who is a former champion strong man. Having suffered from food poverty as a child, he has set up a charity, Miles 4 Meals to help children living in food poverty and has raised up to £50,000 in other charitable challenges.

John Clark said: “I’m incredibly honoured to have been nominated, let alone selected to carry the Baton. The challenges I’ve undertaken to raise money for charity were a real team effort, so I look forward to representing not just my family but the team of people alongside me whilst carrying the Baton in the relay. I am very thankful for this once in a lifetime opportunity to be involved and as a fitness coach, I hope the games encourage more of our nation to get active too”.

The Birmingham 2022 Queen’s Baton Relay began at Buckingham Palace on 7 October 2021, when The Queen placed Her Message to the Commonwealth into the Baton and passed it to four-time Paralympic gold medallist Kadeena Cox, who had the honour of being the first of thousands of Batonbearers to carry the Baton. Since then, the Baton has visited Commonwealth nations and territories in Europe, Africa, Oceania. It still has further destinations to visit in the Caribbean, the Americas, and more countries in Europe. In the Home Nations, the Baton Relay will spend five days in Scotland, four in Northern Ireland and five in Wales, where it will finish on Sunday 3 July, before returning to England in the summer for the final countdown to the Commonwealth Games.

The dates of when the Baton visits each region are:

Members of the public are encouraged to get involved with the celebrations and embrace the arrival of the Baton, taking the opportunity to experience the buzz of Birmingham 2022 in their community.

Cllr Daniel Walton, Portfolio Holder for Economic Development and Tourism at Malvern Hills District Council, said: “It will be an honour to have the Queen’s Baton visit the Malvern Hills District and it is a wonderful opportunity to showcase the district’s beauty to the world. We hope everyone gets involved to not only cheer on our Batonbearers but to get involved in the celebrations and activities. It will be great to see our community come together to support this historical event”.

Phil Batty, Director of Ceremonies, Culture & Queen’s Baton Relay, said: “Whilst the Baton has been travelling across the Commonwealth, we have worked closely with Local Authorities in England to devise a route that engages with hundreds of communities, passing sport venues, historic sites, local schools and Areas of Outstanding Natural Beauty. Yet the Queen’s Baton Relay is far more than just a journey. It symbolises connecting people from every corner of the Commonwealth, celebrates Batonbearers who take on challenges, and marks the countdown the biggest sporting event in West Midlands history.

“And by the time the Baton returns to England for the final leg, 71 nations and territories will have already experienced the magic that comes with it. We hope that communities across the country join the excitement, attend events near them, line the streets to cheer on our incredible Batonbearers and celebrate the Birmingham 2022 Commonwealth Games.”

For more information on the Queen’s Baton Relay, visit the link below:

Taking place on Sunday's across the summer there is a...
Heritage | What's On

This celebration of Malvern's radar history will include two fascinating...
Heritage | What's On