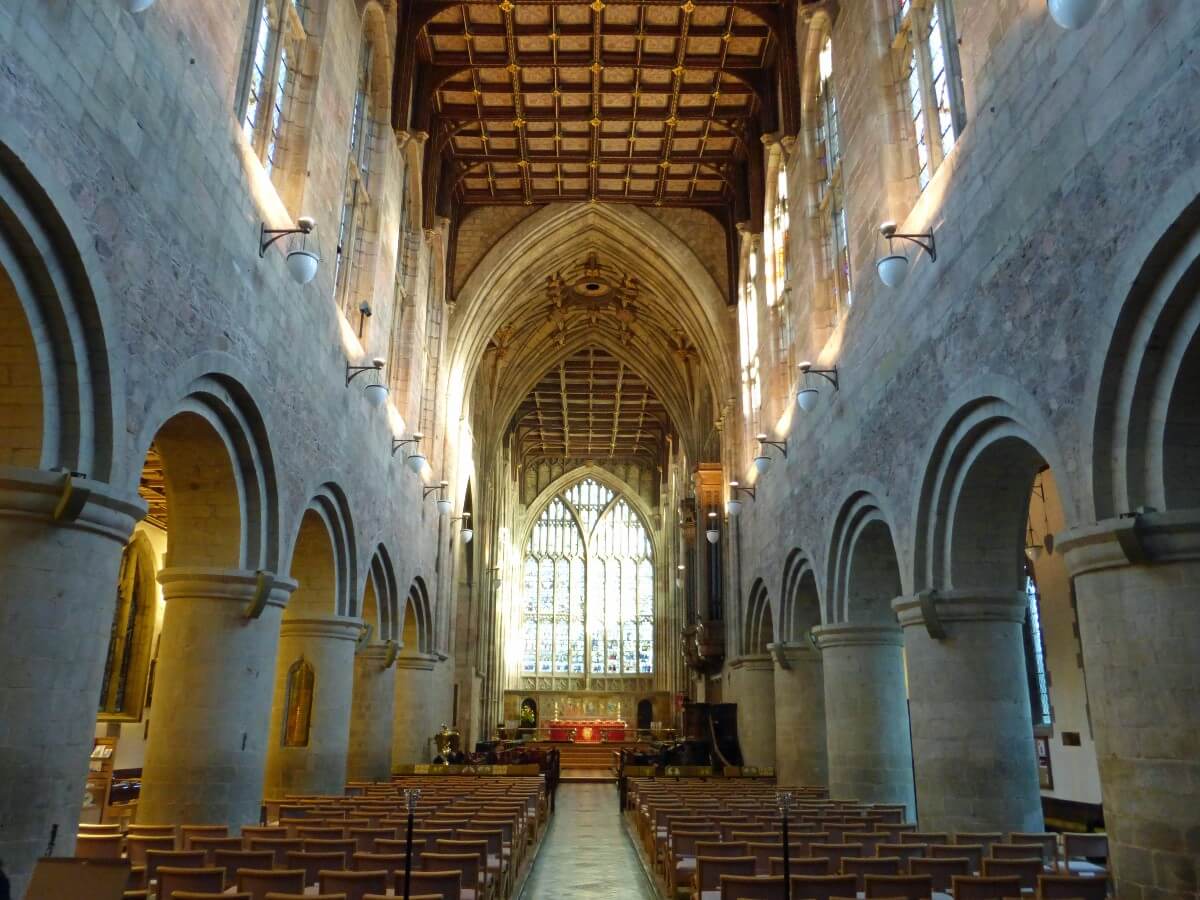 From as early as the Bronze age humans that have lived in and visited the Malvern Hills have forged deep, spiritual connections with the striking landscape. Its easy to see why when the Malvern Hills rise dramatically from the ground and the surrounding countryside is fertile with ancient trees, wildflower meadows and rolling hills – it certainly feels like something deeper is at work. The Malverns past and present is entwined with spirituality be it connected to a traditional religion or something more alternative, whatever your beliefs you are sure to find something sacred in The Malverns.

Leylines and The Whiteleaved Oak

Alfred Watkins, who was local to Herefordshire and was a great lover of the surrounding countryside, theorised that ancient routes, called Leylines, can be traced across the British Isles and connect landmarks and important towns. These perfectly straight, ancient lines are said to connect important points usually coinciding with Churches, beacons, springs and the like having been used in Neolithic and Pre-Roman times as trade or ceremonial pathways. A leyline is said to pass down the ridge of the, remarkably straight, Malvern Hills. Further lines are thought to pass through other symbolic areas of The Malverns such as St Ann’s Well, the Wyche Cutting, a section of the Shire Ditch and Midsummer Hill. Some believe that the lines contain a spiritual force or energy that our ancestors were able to tap into that is lost to us in the modern world.

The Whiteleaved Oak sat on the southern end of The Malvern Hills where the counties of Herefordshire, Gloucestershire and Worcestershire meet for around 500 years. The Malvern Leyline was said to pass through the ancient tree which has also been said to be the centre of the “Circle of Perpetual Choirs” as it is equidistant to two other ancient sacred points at Glastonbury and Stonehenge. This tree was used as a place of worship by locals, Druids and other groups who decorated its twisted branches with ribbons, blossoms, trinkets and crafts at the summer and winter solstice celebrations. The tree also had a “visitors book” which was filled with names, prayers and poems. Tragically this old trees story came to an end in July 2020 when it caught fire and could not be saved by battling firefighters. This serves as a stark reminder to take care of our environment and the sites of religious significance we visit.

West Malvern also became a home of New -Age spiritual practices when Sir George Trevelyan founded The Wrekin Trust there in 1971. For 20 years the trust provided classes, conferences and courses designed to dissolve the barriers between science and religion and help people find the path that was right for them, unimpeded by a single doctrine or dogma.

These theories show us that walking and spending time in nature can be a great way to get in touch with your spirituality and clear the mind. Find the best routes with our Walkfinder and Mobile Walking App.

The Malverns Monks, Priories and Churches

Some of the first inhabitants of the area that is now Great Malvern were monks. The Great Malvern Priory was established in 1085 by a small community of Benedictine Monks who also presided in Little Malvern Priory. These holy people nursed invalids in the Black Death of 1349, when many other Abbeys locked their doors to the sick. The monastery was a place of spiritual reflection but also scientific and mathematical philosophy. The 2nd Prior, Walcher, was one of Europe’s most famous scientists and is credited with introducing the Arabic numerical system to England. The medieval stained-glass windows the monks added in the 1400’s are still visible to worshippers and visitors at Malvern Priory today.

For a magnificent display of religious art visit “Britain’s Finest Baroque Church” Great Witley Parish Church. Still used regularly for services and concerts there is thought to have been a church on this spot since Saxon times. Unique in the British countryside the churches interior is decorated with exquisite, gilded decorations and colourful ceiling paintings by Antonio Bellucci as well as painted glass windows and intricate carved woodwork.

Surrounded by the beautiful countryside of the eastern slopes of the Malvern Hills St Wulstan’s Catholic Church is also worth visiting. The church is the last resting place of Edward Elgar and his family, having been their local place of worship when the lived on the hills. Their services are usually musical and much praised.

In the Teme Valley you can visit Martley’s St Peter’s Church, another ancient Church that has been in constant use since the early 1000’s. This pretty church is home to the oldest set of complete church bells in England and also contains some original medieval wall paintings. Take the Martley trail to visit the church as well as passing through some of the Teme Valleys beautiful countryside.

For a full list and information about all the Churches of the Teme Valley follow the link below:

Other places of worship in Malvern include the Bright Earth Buddhist Temple. The temple runs a welcoming weekly practice as well as other classes and activities such as mindful walks. Most practices are open to all and are also broadcast on Zoom for those who cannot attend in person.

Christmas Markets Across The Malverns 2022

The Mistletoe Festival in Tenbury Wells is back on! This...
Festival | Green Tourism | Health and Wellbeing | What's On

On Saturday 12 November 2022, Colwall Greener will host their...
Home Blog Connect To Your Spirituality in The Malverns