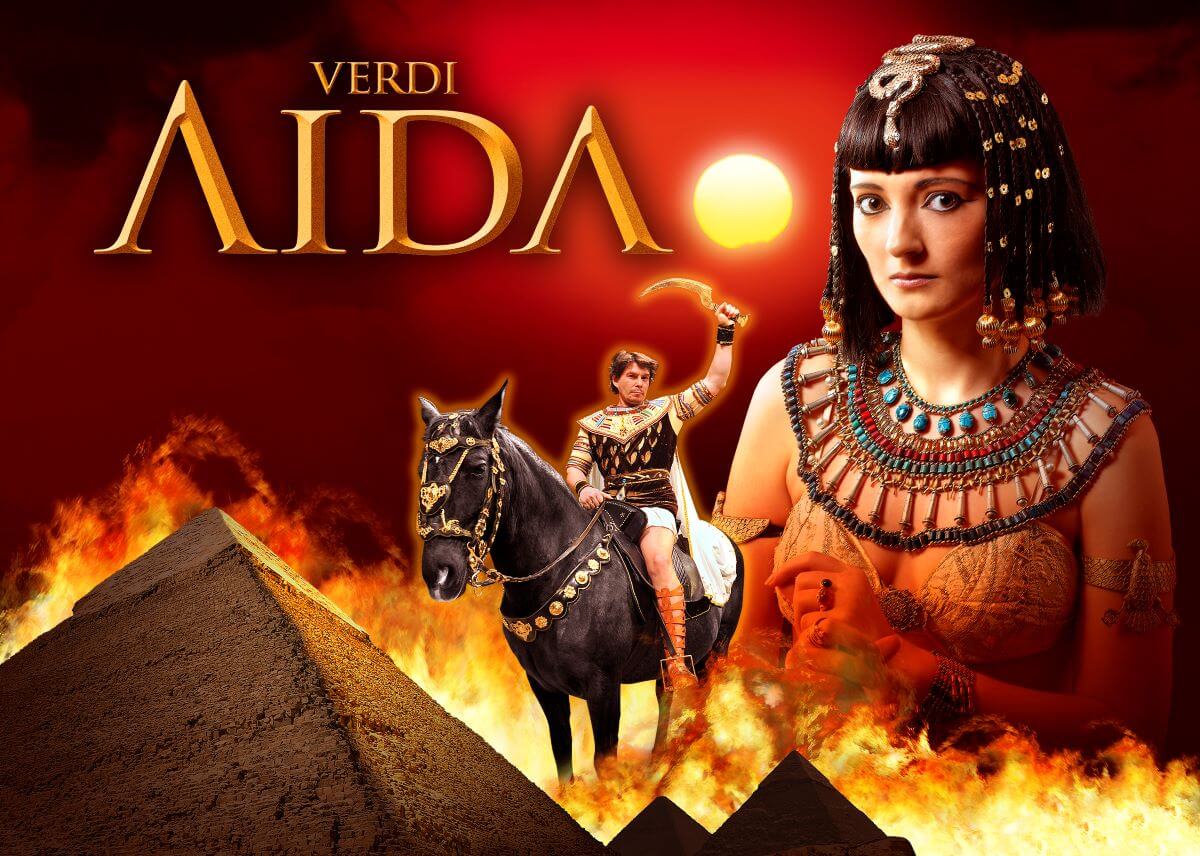 Aida, the grandest of all Ellen Kent’s operas, returns with a stunning new traditional production, boasting an impressive new set built by Set-Up Scenery in the UK, who also build sets for the Royal Opera Covent Garden.

In Aida, the splendour of Egypt is set against the grandeur of the Coliseum of Rome with Ellen Kent’s direction influenced by the ancient Greek dramas of Euripides and symbolising the powerful religious hold of the priests of Egypt.

This tragic story of war, jealousy and revenge at whose heart is the doomed love of the beautiful Ethiopian slave, Aida, and the Egyptian hero, Radames, is brought to life in a production set against one of the greatest pieces of music Verdi ever wrote. With the well-known arias “Celeste Aida”, “Ritorna Vincitor” and the classic “Triumphal March” featuring a temple dance, cascades of glittering gold, magnificent seven foot tall black, ebony statues with gold replicas from the Tutankhamen collection, huge set and many other authentic additions with spectacular dancing Poi fire spinners.

Artistic Director and Producer, Ellen Kent is one of the top opera producers in the UK and has been the biggest supplier of opera and ballet in the UK and Ireland for twenty-nine years. Since 1992, Ellen has created a niche market for the best of traditional opera and ballet from Eastern Europe. She was the first producer to put out a major tour of foreign opera on the British theatre circuit and she dominated the ballet market in the UK for many years. To celebrate her long love affair with the many operas which she now personally directs, in Spring 2023 Ellen is delighted to bring her audiences three brand new productions of; Madama Butterfly, La Boheme and Aida, performed by the Ukrainian Opera & Ballet Theatre Kyiv.

Ellen first worked with the Ukraine on her opera tours in 2002, when she and Opera and Ballet International launched the Ukrainian National Opera Odessa with a summer tour of the UK with La Traviata and The Barber of Seville. In 2005, as a thank you for introducing the Ukrainian Opera to the UK, Ellen was awarded The Golden Fortune Honorary Medal by the Ukrainian president Vladimir Yushchenko.

Ellen said “I have produced and directed many Aida’s over the years and it still remains the biggest challenge a producer can face.  I have staged many sell out performances of Aida’s at the Royal Albert Hall with a cast of 100’s, with ticket touts outside selling tickets to those who still wanted to see the show, arena and outdoor Aida’s in the middle east and in the UK and in many regional theatres from Liverpool Empire to Limerick Concert Hall in Ireland.  My vision of Aida, matches Verdi’s vision and I try and give Aida the grandeur which Verdi achieved in the first production in Egypt when he was commissioned to write an opera for the opening of the Suez Canal and premiered in Cairo1871. From dancing alabaster fountains, Las Vegas style and made in India, life size bejewelled elephants, walls of fire, fire spinners, ballet and Bedouin dancers, enormous sets which have to fit into large to smaller spaces and now for the first time I am introducing a black stallion into the larger venues.  I want all my public to enjoy the grandeur of this magnificent opera, in my opinion the best score Verdi ever wrote – not an easy task.  My Aida’s have been described as “The Las Vegas of operas” which I regard as a compliment.  “Even now, it’s my ambition to stage Aida on the banks of the Nile with a cast of thousands.”

As with all of Ellen Kent’s shows, Ellen has hand-picked all of the soloists and is directing Aida to create a visually beautiful and moving production. Ellen Said “My operas have to be emotional and beautiful.”

Aida will be sung in Italian with English surtitles.

To find out more and book tickets, follow the link below.