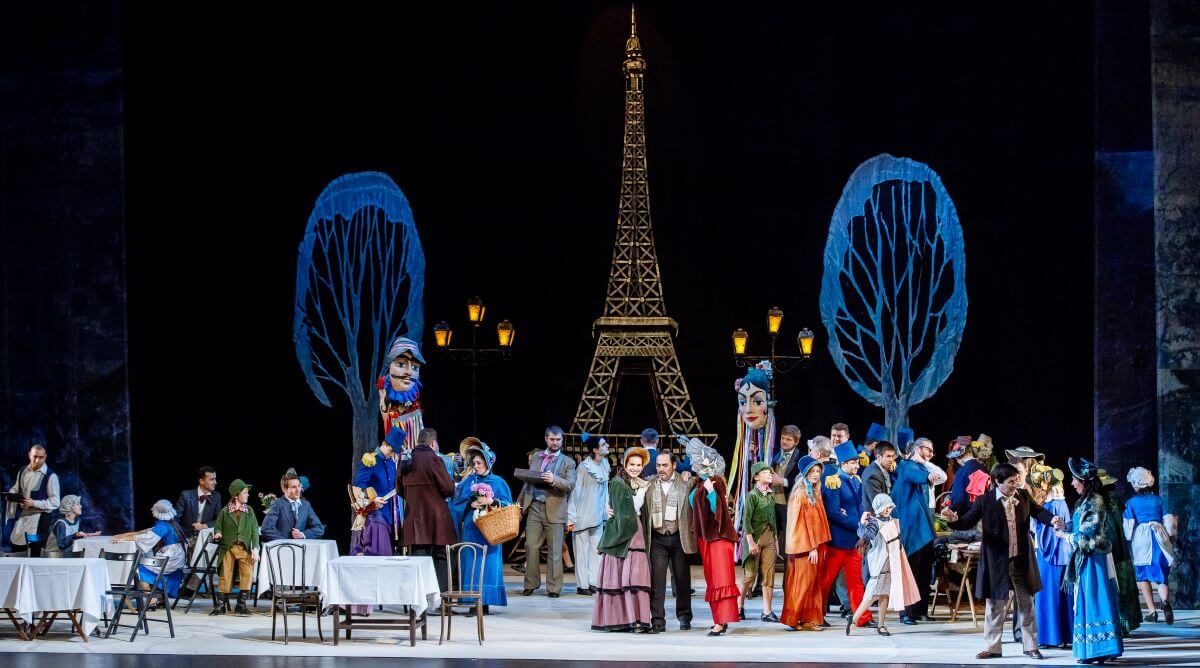 The award-winning opera producer Ellen Kent returns to Malvern Theatres with La Bohème in Spring 2023 performed by the Ukrainian Opera & Ballet Theatre Kyiv, on 7 May 2023.

One of the most romantic operas ever written, La Bohème is traditionally staged featuring beautiful sets and costumes. Set in the backstreets and attics of Bohemian Paris, this powerful and emotional opera tells the heart-breaking tale of the doomed, consumptive Mimi and her love for a penniless writer, Rodolfo. Puccini’s masterpiece, La Bohème, is based on Henri Murger’s novel Scenes de la vie de boheme.

The sumptuous set is inspired by the art of the Bohemian period, particularly Chagall and Renoir. The set reflects the Bohemian art of the period and the authentic costumes will transport you immediately to Bohemian Paris. The production includes a brass band, snow effects and Musetta’s adorable dog will also make an entrance*.

After falling instantly in love, Rodolfo later leaves Mimi due to her flirtatious behaviour, though he is wracked with guilt since their life together has surely worsened Mimi’s delicate constitution. In true tragic opera fashion the pair reunite briefly at the end before Mimi dies. This classic story of Parisian love and loss features many famous arias including ‘Your Tiny Hand is Frozen’, ‘They Call Me Mimi’ and ‘Musetta’s Waltz’.

Ellen said “The scene where Mimi and Rodolfo meet and she sings They call me Mimi always makes me cry. It’s such a beautiful piece of music. I try to do opera that the audience can emotionally connect with, not just on a musical level but with the personal drama happening on stage”.

Ellen’s production of the extreme poverty in the backstreets and attics of Paris was inspired by reading George Orwell’s book Down and out in Paris.

Artistic Director and Producer, Ellen Kent is one of the top opera producers in the UK and has been the biggest supplier of opera and ballet in the UK and Ireland for twenty-nine years. Since 1992, Ellen has created a niche market for the best of traditional opera and ballet from Eastern Europe. She was the first producer to put out a major tour of foreign opera on the British theatre circuit and she dominated the ballet market in the UK for many years. To celebrate her long love affair with the many operas which she now personally directs, in Spring 2023 Ellen is delighted to bring her audiences three brand new productions of; Madama Butterfly, La Bohème and Aida, performed by the Ukrainian Opera & Ballet Theatre Kyiv.

Ellen first worked with the Ukraine on her opera tours in 2002, when she and Opera and Ballet International launched the Ukrainian National Opera Odessa with a summer tour of the UK with La Traviata and The Barber of Seville. In 2005, as a thank you for introducing the Ukrainian Opera to the UK, Ellen was awarded The Golden Fortune Honorary Medal by the Ukrainian president Vladimir Yushchenko.

As with all of Ellen Kent’s shows, she has hand-picked all of the soloists and is directing La Bohème to create a visually beautiful and moving production. Ellen Said: “My operas have to be emotional and beautiful. I try to produce opera that the audience can emotionally connect with, not just on a musical level but with the personal drama happening on the stage.”

La Bohème will be sung in Italian with English surtitles. The production also boasts a full orchestra and chorus.

La Bohème will be performed at Malvern Theatres. Tickets start at just £29.68 and are available from the link below or call the Box office on 01684 892277. Please note that certain seats may have restricted views of the surtitles. Please check when booking tickets. All information is correct at time of release. *Cast subject to change. Musetta’s Dog will make an entrance wherever possible.